Apple’s $400 million take over of Shazam is in jeopardy after the EU believes Apple acquisition of the company would lead to an unfair advantage over their competitors
This comes due to sensitive data being collected by Shazam about rival music streaming services which could be used by Apple if they were to buy the company. A deadline of Sept. 4 has been set for the authorities to do their investigation and find out whether Apple will, in fact, receive an unfair advantage. 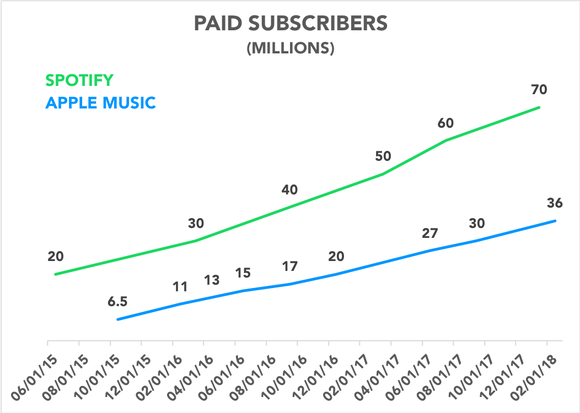 Graph from yahoo finance.
Apple was considerably late to the music streaming market, with Apple Music being first being released in the late June of 2015, compared to Spotify who was released 7th October 2008; because of this the amount of users on each service is considerably marginalised, with Spotify stating that it has 71 million users. That is 33 million more than Apple Music. This deal would have meant a massive boost in user numbers: primarily, the data Apple would inherit would include music tastes (from listening time, playlist adds, downloads etc.) which could then be used to predict music trends this being used by producers to see if their music may be popular. This would provide encouragement for big and small artists alike to begin posting their music on the app, this then drawing a crowd from certain genres. To add to this, Apple should use this data to make sensible deals with producers that they deem to be popular or that will become popular for exclusive music from bigger producers who fans will then see the need to get a subscription. This data they have in insignificant amounts in comparison to Spotify (because of the time difference in release and the number of users), as outlined by Business Insider’s Kef Leswing:

One of the most underrated aspects of Shazam’s business, according to an investor, is that Shazam offers an analytic control center — a “dashboard” — for music industry professionals. Record labels and executives have learned to rely on it to discover songs that are starting to get popular.
When someone identifies what a song is through Shazam, that’s a pretty strong signal that it’s catchy, or distinctive. “Our data has shown that we can typically predict 33 days in advance what’s going to be at the top of the Billboard Hot 100.”

Secondarily more users would come from users being directed from Shazam to Apple Music upon identification of music. To encourage the use of the Shazam service, Apple may eradicate the Shazam App entirely and instead fully integrated it into the Apple Music app, with massive fans of the app, therefore, being inclined to get a subscription.
Personally, I see it is a sensible business move by Apple: though it may provide them with an unfair advantage, they are in fact buying the data itself as a majority of the total price, money that (in such a quantity) you hope would provide an advantage of a large size considering the limited functionality the Shazam app itself provides (ie music identification).