In the wake of the rapidly declining Chinese smartphone sales, Apple has been displaced from its previous No.4 position in terms of sales in China, overtaken by a local brand Xiaomi, a brand that managed to grow rapidly despite the 21% decrease in smartphone shipments to 91 million units annually.

According to a report by the company Canalys, China’s smartphone sales saw a drastic decline of 21% in the first quarter of 2018, and 8 out of the top 10 companies experienced a fall in sales, including Apple, which was overtaken by the local brand Xaiomi due to its rapid in terms of shipments of around 37%, to roughly 12 million units despite Apple’s having edged ahead in the final quarter of the previous year., the only other increase in shipments was observed by the top brand Huawei which also managed to grow but only by a mere 2%. The report made it clear that accounting for more than 73% of the total shipments for the first quarter the Chinese market is being increasingly dominated by the brands Huawei, Oppo, Vivo and Xiaomi. 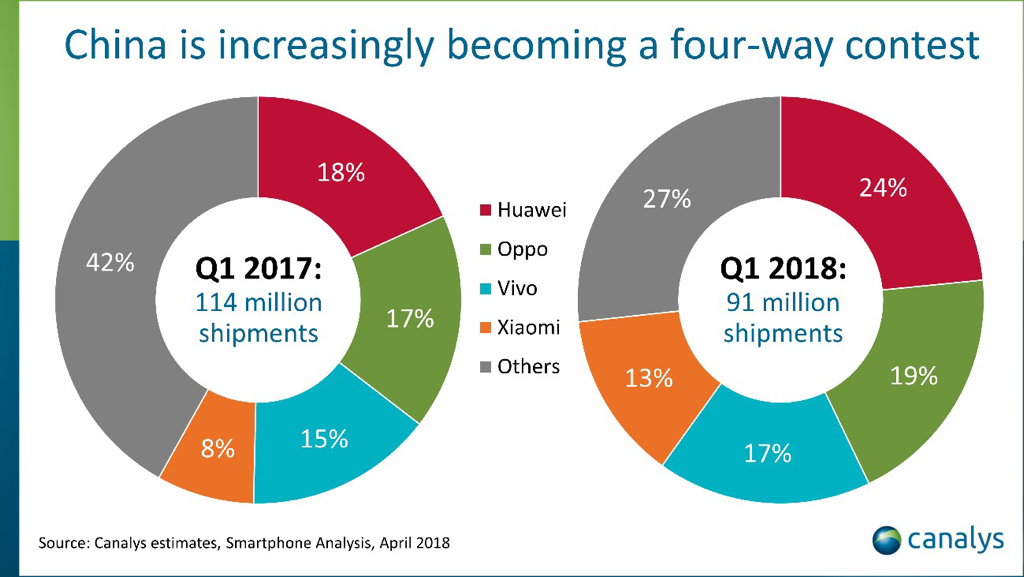 Meanwhile, companies behind the top 5 saw their market share slide to a pitiful 19 percent, as the decreasing shipments and expansion of the larger firms forced them back in terms of progress.

“The costs of marketing and channel management in a country as big as China are huge, and only vendors that have reached a certain size can cope,” said Mo Jia, an analyst at Canalys, he then added, “While Huawei, Oppo, Vivo and Xaiomi must contend with a shrinking market, they can take comfort from the fact that it will continue to consolidate.”